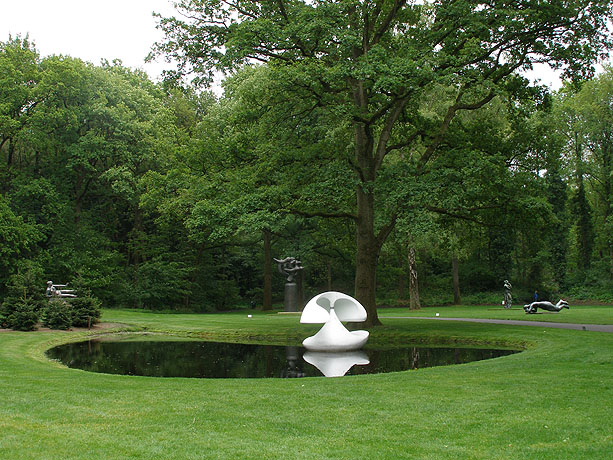 
During the late 1950s the Kröller-Müller Museum designed a sculpture garden in the natural surroundings of the museum and sourced artworks that would suit the landscape and architecture in the park. The then director of the museum, A.M. Hammacher wanted a work that combined three elements: museum, garden and water. He proposed this to Marta Pan (b.1923) a young Parisian sculptor, who then designed Sculpture flottante, Otterlo in 1960 – 61, the first of many floating sculptures she would go on to produce.

Sculpture Flottante, Otterlo has retained its functionality both in material form and artistic appearance for a long time. General maintenance has consisted of cleaning the surface, removing leaves and dirt by museum staff. The sculpture is stored between the months of November and April to protect it from the pressure of frozen water. For this purpose a custommade pick-up trolley is used to lift the heavy sculpture from the water.

Recent investigation has provided an insight into the material history of Sculpture flottante, Otterlo. Old photographs show the sculpture in a bright and pristine condition. The floating position in the water and the turning of the top part, in combination with the free floating of the bottom part, accord with the artist’s idea as shown from her drawings and the technical design. Remarkable is the shiny reflection of the glistening water on the white surface – today the matt surface does not reflect the light in the same manner. The original metal joint is visible on several of the early photographs, whereas now a large clamp is attached around the neck, its bolts altering the outlines of the sculpture. This clamp is an early repair to reinforce a serious crack in the GRP that spread upward along the ‘neck’ from the joint at the end of 1965. The break was repaired with synthetic glue and a blacksmith added the clamp. The new clamp and the bolts are painted white to match the rest of the sculpture. [...]
documents